May they Rest in Peace 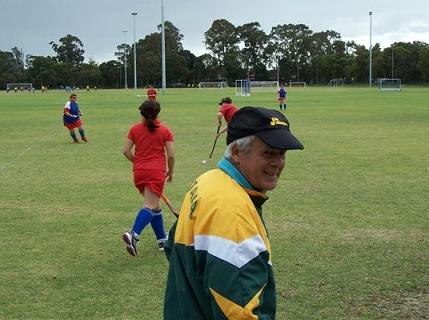 On December 13, 2010, the Club lost one of its most loved and respected members, when Bob Sturgeon passed away.  In his younger days playing for Bassendean-Bayswater, he’d been a state player at colts level and most recently had played for the Australian Over 70s side, so hockey had been a huge part of his life. He came to Kalamunda as senior coach 1985-87 and his 1986 1D premiership side is considered one of the best to ever take the field for the club. He played on with Kalamunda for a while in the late 80’s, then returned around 2000, to get involved in our 2nd 40s side. He was part of our first ever 50s side, and then the 55s, always as the oldest (but fittest) player. He would often be there to help out at training, having a way of picking up a little technical flaw and explaining how to fix it that made it all seem simple. He then took on coaching our Hills womens teams when they were at a low ebb, and turned them on the path towards being the powerhouse in the comp that they are now. In 2009 we made him a Life Member of our club, a small recognition of all he’d done for us.

Bob’s funeral just before Xmas was attended by several hundred people, a sign of just how widely he was respected. We extend our deepest sympathy to Bob’s family.

It was late last week that the Kalamunda Districts Hockey Club learnt of the sudden and unexpected passing of one of its most influential members from the past. The name Joe Bruers isn’t well known by most of the current generation of players, with most possibly only recognising him as an Association umpire. In fact there may only be a handful of active members who actually remember seeing him play at all, let alone appreciate the significance of his contribution.

I joined the club shortly after Joe retired as a player, but was lucky enough to see him play some years later in the inaugural David Scanlon Memorial Match. Joe borrowed most of my goalkeeping gear, apart from the helmet, which he considered unnecessary. He then proceeded to put on a display that would’ve been impressive for a player in his prime, let alone someone approaching 40 who hadn’t taken the field for years.

Even so, it wasn’t until we started to collate information for the Club History on this website that the importance of Joe Bruers to Kalamunda became apparent. From the old Hotlines it was clear that Joe was one of our key players throughout the 1970’s. He was effectively the number one keeper through that decade, an impressive achievement considering the meagre padding worn in those days. He played in the undefeated B1 Green Premiership side of 1971, alongside Dave Scanlon, Nairn Ashworth, Alex Fewings and John Woodbury. Later in the decade Joe was a part of the sides that achieved promotion to 1B on several occasions, and with relegation usually following soon after, no doubt had a busy time in 1B. Over this time he was one of the more active clubmen, working on the committee, coaching juniors and a driving force on the social side.

In the early 80’s Joe retired as a player, but maintained his involvement in the game through umpiring. No longer a club member, Joe’s influence at Kalamunda was felt in less obvious ways. He was responsible for assembling and designing a number of our perpetual trophies. Joe frequently came back to umpire games such as the Scanlon Match. In 1991 he even put on the pads for one last time to replace the injured Masters keeper Bill Fox, allowing the team to play (and win) their grand final. A regular at the stadium on weekends, he was a frequent spectator at Kalamunda games. His final act of support for Kalamunda came after the 2001 season, when he presented Margaret Howe with a large collection of lost hockey balls he’d collected over his seasons of umpiring.

A good example of the strength of Joe’s character came in the Under 17B Grand Final of 1994, featuring Kalamunda against Old Aquinians. The game was played at the Stadium during heavy rain and was eventually decided on penalties. Kalamunda thought it had won when an Aquinians stroke appeared to miss off the crossbar. However, Joe called it a goal, claiming that in its downward path it had crossed in, before bouncing on the line and spinning out. Aquinians went on to win. Joe wasn’t popular at the time, but those of us without children playing in the game appreciated that he’d made a brave decision, backing his judgement without wavering under intense pressure.

Enthusiasm was a feature of Joe’s umpiring, despite the anti-social timeslots he seemed to get on a regular basis. His umpiring never reached the level he achieved as a player, but he was always consistent, a virtue that is less apparent in recent years as the umpiring ranks have thinned. I think Joe was a little bemused as he saw lesser umpires allocated to higher level games than himself (possibly due to their youth), but he never let it affect his own enjoyment of umpiring.

Joe was a great help during the assembly of the Club History, providing team photos from the 1970’s, as well as graciously proof-reading and correcting the text. I enjoyed many conversations with him over the years on all aspects of hockey in WA and at Kalamunda in particular. My regret is that it took us so long to recognise his role in the development of Kalamunda as a viable club, and that we’ll now never get to thank him personally.

On behalf of the Club, I extend our deepest sympathy to Joe’s family.

David Scanlon began his playing career with Fremantle as a junior and also played as a senior in their first XI.  He joined the young Kalamunda Hockey Club in 1969, and remained associated with the club as a player, coach (junior and senior), committee member, president or junior coordinator up to his death in 1988.  He was a playing coach in the undefeated B1 Green Premiership side of 1971 (the club’s first Premiership) and also won his first Best Club Man award.  Despite a long playing career, he is best remembered for his outstanding organisational skills and wonderful rapport with juniors.  In the early 1980’s, while the club’s senior playing strength was at a low ebb, David’s efforts greatly expanded our junior base, generating a number of quality players, may of which are still playing at a high level today.  He was not only good at passing on knowledge of hockey to juniors, but sharing with them his love for the game.  He also represented Kalamunda on the WAHA Junior Committee, which he chaired for four years.

David had long had the ambition of building clubrooms to give the club a proper home and a sense of permanency.  He became the driving force in fund raising as well as in gaining support from the Kalamunda Shire and the Department of Sport & Recreation.  Construction began in 1986, with an official opening in 1987.  The club had no hesitation in naming the building the “David Scanlon Pavilion”.

Its hard to express adequately in words the influence David Scanlon had on hockey within Kalamunda and the surrounding districts.  Neil Mannolini did it as well as anyone could on the front page of the Hockey Bulletin(August 6, 1988):

Some walk tall, some ARE TALL,
some work hard, some work more,
some keep giving, never taking,
cramming more hours of honest endeavour in hours waking,

Quietly doing, no song and dance, no keeping score.

He started as a teacher, then graduated to flying high.
Yet when not jetting, he was on ground contributing.
Kalamunda Hockey Club last year named a pavilion after him,
they knew how much he did for their juniors especially.
But we all knew, and enjoyed his management skills, his talent.

Sadly we took it for granted.
Not knowingly, but in fact we did.

Today David Barnaby SCANLON is not with us,

we can’t shake his hand and say well done.

We shed a tear when we heard the news
God has called upstairs a favourite son,
he now flies the celestial crews.

Janet and family are sadder than us.
We share their grief, express our tearful sympathy;
Hockey’s gratitude in thankful chorus,
God bless you, David Scanlon.

More than a decade after his passing, Dave Scanlon is remembered by all with affection and respect, and as representing all that was good about our club.